Arsenal star Alexis Sanchez may swap the Emirates stadium for the Allianz Arena this summer, according to El Mercurio.

The Chilean forward, whose contract expires at the end of next season, has refused to put pen to papers on a new contract at Arsenal and speculations linking him with a move away from the North London club keep increasing by the day. 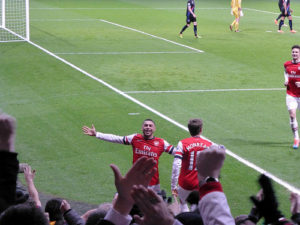 Chelsea, Man City, Juventus and Bayern Munich have all signified their interests in signing the prolific attacker but reports claimed that Bayern are leading the race to secure the signature of the forward.

The former Udinese man has been frustrated with the Gunners’ lack of winning mentality and with the club finishing outside  the Premier League quartet and missing out on a place in the Champions League next season- their first in twenty year, Sanchez and some star players could be on their way out of the club.

Sanchez moved to Arsenal from Spanish giant Barcelona in 2014 and has scored 71 goals in 143 appearances for the club, winning the FA Cup and two community shields. The 28-year-old has scored 29 goals and assisted another 19 in 50 games for the Gunners this season.

Arsenal face Chelsea in the FA Cup final match at the Wembley Stadium on Sunday and that could be Sanchez final appearance in an Arsenal jersey.