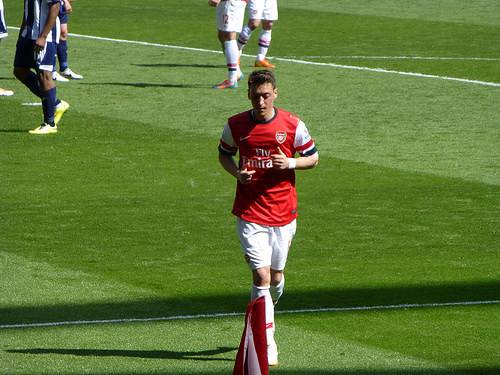 A bruising 3-1 Premier League loss at Liverpool brings more gloom ahead of Arsenal attempting the unthinkable against Bayern Munich, but the Bundesliga champions’ recent European away form offers some comfort.

Even the most optimistic Gooner doesn’t think his boys can overturn a 5-1 first-leg deficit and see Arsenal through a Champions League knockout round for the first time since 2010.

That being said, a win of some sort shouldn’t be beyond them.

Carlo Ancelotti’s men lost two of their three Group D away matches in the first half of the campaign, going down 1-0 against eventual table-toppers Atletico Madrid and suffering a 3-2 reverse at the hands of FC Rostov in Russia.

The pattern of patchy road form stretches far back to the middle of Pep Guardiola’s tenure at Allianz Arena, with Bayern winning just three of 13 fixtures on their European travels since October 2014, losing seven of those matches including 2-0 against Arsenal at the Emirates 18 months ago.

Arsene Wenger’s side were unbeaten at home in Group A, eventually securing the poisoned chalice of top spot, and boast four victories in their past six Champions League fixtures at the Emirates, where the hosts have prevailed in five of their six matches all told since late November.

All that being said, Ancelotti and co are unbeaten in 16 over the same period, winning 14 times during that run and bagging at least three goals in four of their past five outings.

Hamburg were thumped 8-0 in front of the faithful at the end of last month, with striker Robert Lewandowski helping himself to a hat-trick.

Over the weekend, centre-half Mats Hummels and dangerman Arjen Robben put their heels up on the bench while teammates strolled to 3-0 victory at Cologne.

Arsenal have an FA Cup quarter-final at home to Lincoln next weekend, followed by in-form trio West Brom, Manchester City and Leicester in the Premier League as Wenger scrambles to regain a top-four place.

The form says Arsenal can beat Bayern Munich at the Emirates, but with practically no chance of progression, perhaps they shouldn’t tire themselves out trying.