The uncertainty surrounding Arsene Wenger’s future notwithstanding, Arsenal may have finally  snapped up one of their top transfer targets, Sead Kolasinac, if reports from Sky Sports are anything to go by.

The Emirate outfits had been involved in a transfer saga with the Bosnian international after an earlier report in April claimed the Schalke 04 defender has signed for the London club, only for his father to deny such claims. 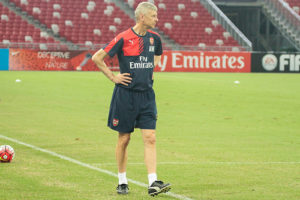 The potential absence of Champions League football at Arsenal next season was also believed to be a key factor in the 24-year-old choosing his next destination.

But as it stands now and regardless of the aforementioned as well as coming from a reliable source like Sky Sports, Arsenal appeared to have beaten the likes of AC Milan, Everton and Man City to his
signature.

Kolasinac, who has spent a major part of his criteria in Germany will move to the Premier League club on a free transfer in the summer, after agreeing to a long-term contract with the club.

His versatility has endeared him to many big clubs as he can play in the left-back, as a centre-back and as a defensive midfielder. And following another disappointing season for the Gunners, the signing of
Kolasinac will provide the needed depth in the defence.

Arsenal could end up playing in the Europa League next campaign. They are currently three points adrift the fourth place on the league standings and will need Liverpool or Man City dropping points to
maintain their history of featuring in the Europe primary competition every season under Wenger.

The arrival of the £35,000 per week defender could scupper the future of Kierian Gibbs or Nacho Monreal with the former more likely to exit the Emirates stadium this summer.