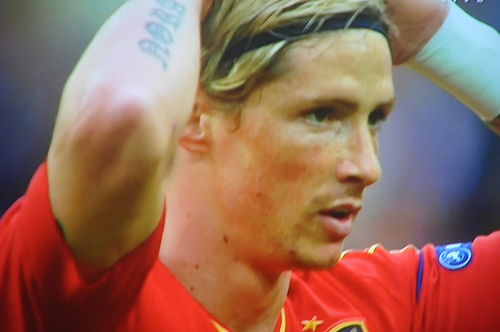 Atletico Madrid striker Fernando Torres was discharged from hospital on Friday morning after suffering a head injury against Deportivo La Coruna on Thursday.

The 32-year-old was involved in a sickening clash of heads with Alex Bergantinos which saw him crash to the floor and land heavily.

He was attended to by doctors inside the ground for several minutes before being taken to hospital in an ambulance.

Thankfully Atletico confirmed that his scans revealed “no traumatic alterations or injuries” and Torres will only require 48 hours of rest before returning to training.

According to BBC Sport, upon leaving the hospital, the Spaniard said:

“Thank you all for caring for me. It was only a scare.”

Torres sustained his injury in the 85th-minute of his side’s match against Deportivo. After being stretchered off, Atletico were forced to play the remainder of the game with 10 men. They had already used their three substitutes.

Players from both teams were visibly upset by the incident that had left the former Chelsea and Liverpool striker on the floor. However, the game was restarted and finished 1-1 after seven minutes of added time.

Antoine Griezmann rescued a point for the away side after he scored a stunning goal from 25 yards to level the match midway through the second half. Florin Andone had given Deportivo an unexpected lead less than 15 minutes into the game.

The draw leaves Atletico fourth in La Liga just one point ahead of Real Sociedad in fifth. They are now nine points behind Sevilla in third and 11 points behind Barcelona, who top the league.

Madrid next host Valencia at the Vicente Calderon on Sunday. It’s unlikely that Torres will feature in the game even though it comes more than 48 hours after his injury.

The club will not want to rush their striker back, especially since the injury could have been a lot worse than it actually was.

Manchester United 3-2 Southampton: EFL Cup Final report
Football League Latest: No one left for Fleetwood to fear on the march to promotion
To Top