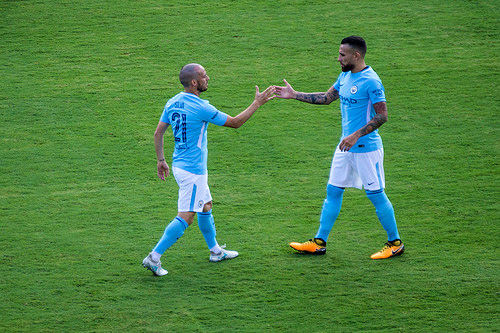 Filling five positions sounds simple, but with only one player per Premier League team allowed, it’s not quite as easy as it seems…

With five clean sheets in six 2017/18 top-flight outings, and a series of memorable saves when called upon, David de Gea has undoubtedly been the Premier League’s class act between the sticks.

Unfortunately for the Spaniard, some of his Man Utd teammates have proved useful outfield too, so De Gea is sacrificed in favour of the Terriers’ great Dane.

Lössl has four shutouts from his first six Premier League appearances, while pulling off a couple more saves than Spain’s number one.

The Belgian has been somewhat taken for granted of late, missing out on wide acclaim since compatriot Toby Alderweireld joined him in the Lilywhites’ backline two years ago, with the latter crowned Spurs’ player of the season in his first term.

Both have started the current campaign in tip-top form alongside summer recruit Davinson Sánchez, with Spurs’ new three-man defence helping haul them up to fourth despite a tricky start.

Only David Silva (504) has made more Premier League passes than Vertonghen (498), with the 30-year-old finding his man more than 86 per cent of the time

With the best passing accuracy of United’s midfielders at 88.5 per cent, and by far the most tackles and interceptions, the Serbian squeezes out former Chelsea teammate N’Golo Kanté and Leicester’s Wilfred Ndidi in the centre of the park.

Liverpool’s Mo Salah has strong claims after bagging four goals and laying on an assist, and the Egyptian’s presence would allow for Sergio Aguero up front, but it wouldn’t be right to leave out the man known down the Etihad as ‘Merlin’.

Five-goal Raheem Sterling and wunderkind Leroy Sane – who lit up Manchester with a goal and two lovely assists against Crystal Palace over the weekend – are both benefitting from Silva’s metronomic passing and ability to steal space in a tight spot.

He’s on his own on six assists so far this term, one clear of vaunted Red Devils number 10 Henrikh Mkhitaryan.

The former Real Madrid and Juventus striker rose to joint-top of the scoring charts alongside Aguero and Romelu Lukaku, with six, after bagging a hat-trick in Chelsea’s 4-0 storming of Stoke at the Bet365 Stadium.

Morata’s two assists put him one behind Aguero, and one ahead of Lukaku, but with Silva supplying the bullets, there’s nothing like a forward in flying form.