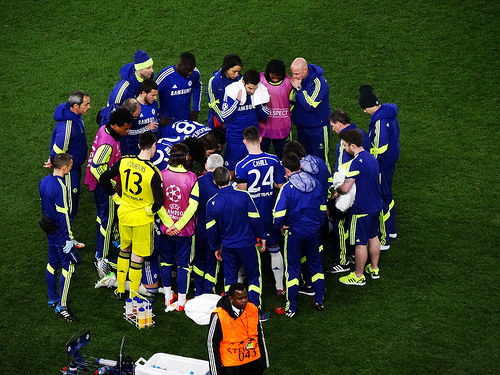 Arsene Wenger reckons there aren’t many interesting games during the group stage of the Champions League any more, but then he would say that, because Arsenal aren’t in it this season.

Here’s a few juicy-looking fixtures we pulled out of thin air, with more in the mix. Poor old Arsene…

How far have Chelsea come under Antonio Conte?

Without Champions League football to distract the Blues last term, Conte pulled off a fine Premier League title success at the first attempt, but the 48-year-old has little managerial pedigree in the continent’s top tourney.

Juventus were knocked out in the quarter finals and the group stage during Conte’s spell at the Bianconeri helm, with Maxi Allegri making his compatriot look bad by leading the Old Lady to two finals since.

Away to Atletico Madrid, themselves Champions League runners-up in two of the past four campaigns, at Los Colchoneros’ new 67,000-plus capacity home could prove Chelsea’s biggest test yet under a manager whose future constantly seems in doubt.

Fergie time for Man Utd and Liverpool in Russia

One of the most eye-catching features of Manchester United’s European evolution under Sir Alex Ferguson, from the late 1990s onwards, was the Scot’s insistence on playing a variation of 4-5-1 away from home in the Champions League.

It took time for the tactics to bed in, but Fergie stuck with it and reaped the rewards, with the Red Devils reaching three out of four finals by the end of the first decade of the century, winning once and losing twice to Pep Guardiola’s irresistible Barcelona side.

After United’s 3-0 swatting aside of Basel in their first home fixture, Jose Mourinho will be pragmatic enough to see avoiding defeat as top priority following the long flight to Moscow.

Such thinking may go against Jurgen Klopp’s DNA, especially after Liverpool’s lax 2-2 draw with Sevilla at Anfield, but the German has seen his side ship 18 goals in 10 games so far this term.

This will be the Reds’ last chance to secure a September shutout, and having conceded 12 since the start of the month, their fraught defence could really use the confidence boost of a clean sheet.

Have rumours of Bayern Munich’s demise been exaggerated?

Borussia Dortmund are setting the kind of pace the Bavarians have been known for in the Bundesliga, surging to the summit of German football with five wins and a draw from their first six domestic fixtures under new boss Peter Bosz.

Carlo Ancelotti’s perennial champions are only three points behind in third, having lost 2-0 at second-place Hoffenheim and drawn 2-2 at home to Wolfsburg last time out, so the knives shouldn’t be too sharp just yet.

However, with Hoffenheim’s sensational young gaffer Julian Nagelsmann increasingly talked up as the next Allianz Arena chief, Ancelotti is clearly under pressure for his job.

Man City and Spurs stalwarts feature in Premier League five-a-side team of the season so far
Best of the Rest North West – Who’s revving up behind Man Utd, City and Liverpool?
To Top