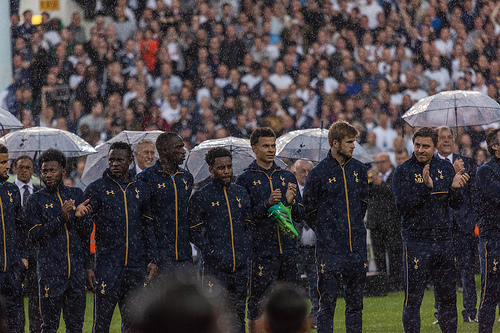 Tottenham fans’ thoughts regarding their upcoming clash away to Real Madrid were pretty much summed up by this tweet following the draw:

DJ Sissoko at the Bernabeu https://t.co/8gURPJ4P3V

Lilywhites enigma Moussa Sissoko has something of a reputation for performing on the big stage, having kept N’Golo Kante out of France’s XI in the knockout rounds of Les Bleus’ ultimately unsuccessful Euro 2016 campaign.

However, Spurs supporters may be spared the Sissoko gamble in Spain’s capital given Mousa Dembele is back in contention after missing five of the past six games.

The Belgian’s absence may not have been keenly felt thus far, with Sissoko and latterly Harry Winks slotting in next to Eric Dier during a run of four wins out of four all told since mid-September.


Los Blancos on their own patch will prove an entirely different prospect to West Ham, Apoel Nicosia, Huddersfield and Bournemouth.

Christian Eriksen’s effort against the Cherries finally secured Spurs a Premier League victory at Wembley, but they got that monkey off their backs with a smash-and-grab effort just after half time, not through fantastic football.

Not only does Dembele bring Spurs’ best Premier League passing average this season at 96.4 per cent, he drives his side forward from midfield.

The ability to beat a man

Dembele’s teammates trail in the dust when it comes to dribbling, with the 30-year-old taking on opposing players 2.5 times per fixture on average in the top flight.

Next best is fellow deep midfielder Victor Wanyama (injured) on 1.5 dribbles per match, with Sissoko managing just one and youngster Winks 0.3.

The deficiency showed up in North West London, with substitute Sissoko’s late run at Eddie Howe’s men the only dribble to come from central midfield over the 90 minutes.

Dembele managed three on his own in the 3-1 Champions League win at home to Borussia Dortmund.

In Madrid, Pochettino could use that drive from a player he considers a rare genius.