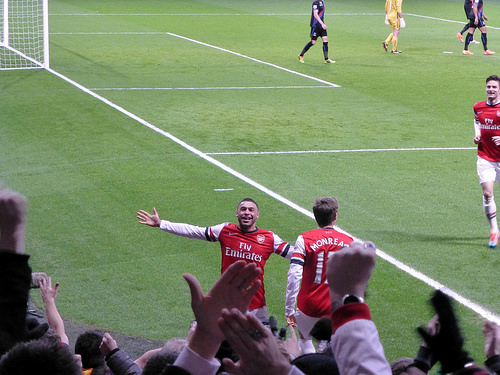 As Sky Sports Arsenal News Report confirms. Good news to Arsenal fans as prime target Alexandre Lacazette has passed his medical with the Gunners at Colney training ground on Tuesday according to Sky Sport.

The highly rated striker is expected to sign a five-year deal after Arsenal agreed a 46 million deal with Lyon which could rise to £52 million based on his performances.

This deal is certainly a record deal for Arsenal as it exceeds £42.5m paid to Real Madrid to sign Germany international Mesut Ozil in 2013.

Lacazette was the second highest goal scorer in the French Ligue 1 last season, with a total of 28 goals in 30 league matches.

The French international was initially tipped to join Atletico Madrid, but their recent ban by FIFA means they won’t be able to register any player until January and Arsenal capitalise on that to sign him.

However, the arrival of Lacazette to Arsenal is expected to cool off Alexis Sanchez intentions to leave Emirates Stadium.

Lacazette acquisition is a sign that Arsene Wenger is ready to splash the cash and add more forces to his team as he hopes to bring back the fortune of the club.

However, Olivier Giroud could leave Arsenal for a team that can guaranty him a starting spot, having fallen down the pecking order in Wenger starting eleven. Follow Footall.com for all the latest Sky Sports Arsenal News Report!