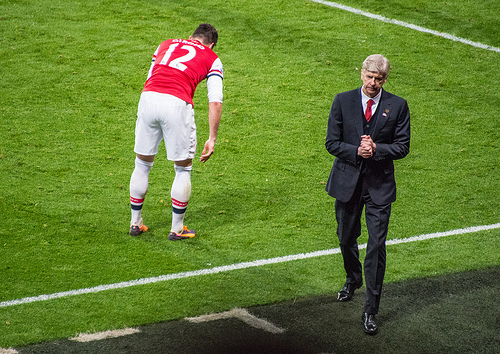 Counter-attacking Leicester certainly benefitted from high defensive lines and sides moving forward in units during their title-winning campaign, although N’Golo Kante clearly covered a multitude of ills in midfield.

Jose Mourinho used to make the weather, but the Special One’s finely tuned, ‘organised’ Manchester United machine has done okay against the masters of the high press – Liverpool, Tottenham and Manchester City – over the past year.

However, United’s title fate could be sealed this weekend if they lose to Spurs at Old Trafford, a result that would leave Pep Guardiola and Mauricio Pochettino fighting it out in the Premier League’s top two spots.

Jurgen Klopp, pioneer of the gegenpress, isn’t sailing the good ship Liverpool quite so smoothly this season, but is likely to be given time to right its course.

Each guided their clubs above Arsenal last season, with City away and Spurs at home coming up for the Gunners after playing host to Swansea this weekend.

Should they fail to snap that jaded run with a victory, the game will truly be up as far as the title race goes, as City have already stolen a nine-point march over Wenger’s men.

It seems clear to all but those in the Emirates boardroom that the Frenchman’s best days at the club are squarely in the past, but there is talk that his position will be reviewed again at the end of the campaign.

Tuchel fits the gegenpress mould, having coached in the youth ranks and reserves under Klopp at Mainz before taking over there and eventually at Borussia Dortmund when his mentor moved on to greener pastures.

Bayern Munich and Everton are also thought to be keen on the 44-year-old, who left BVB in odd circumstances last May.

However, if Arsenal are on the hunt for a managerial weapon to fight fire with fire, they needn’t look far.

Since taking over at Huddersfield the same week his old boss landed on Merseyside, Wagner has kept the Terriers up, propelled them into the Premier League for the first time, and can now add Man Utd to an impressive list of early scalps.

Why he doesn’t currently warrant a price to be next Arsenal manager is a mystery.

The inevitable rumours: 2016 saga relived while Man Utd and Spurs chase left back
What exactly is the point of Man City’s trumpeted academy?
To Top