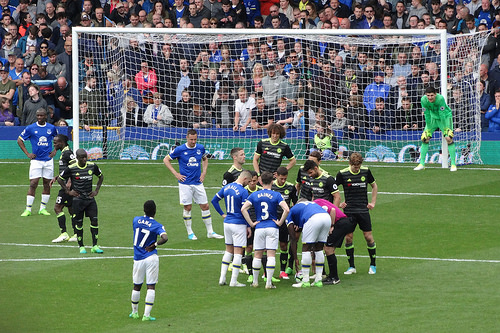 For some players – such as Aaron Lennon and Kevin Mirallas – missing out on a regular place in Everton’s XI as the Toffees start the season in floundering form is a bad look.

The newly-minted England U21 international landed at Goodison Park last January and made an immediate impact, bagging a minute after coming on for his debut in the 4-0 win at home to Manchester City.

No goals in seven further Premier League appearances towards the end of last season, three from the off, has seen Lookman slip down Everton’s pecking order.

The 19-year-old has only been granted EFL Cup and Europa League minutes for Koeman’s side since, failing to fire in four fixtures but going unbeaten this term.

Despite his diminished standing on Merseyside, a queue is forming around Goodison for Lookman’s services, if the gossip columns are to be believed.

Tottenham, Huddersfield and Crystal Palace were all rumoured to be keeping tabs on the Wandsworth native’s situation, with the former thought to have been keen last January.

The Sun suggests an offer of £15m might be enough for Everton to do business, but with a raft of clubs chasing the youngster, merely doubling the money Charlton received 10 months ago will likely prove a starting bid.

However, Wenger can dangle an Olivier Giroud-shaped carrot in Koeman’s direction, after the France international revealed he came ever so close to heading north over the summer.

Yet to make a Premier League start this term, having slipped behind new signing and compatriot Alexandre Lacazette in the Emirates striking stakes, Giroud may be tempted to take the plunge in the new year.

Man Utd, Man City, Liverpool…why is it so hard to find a reliable left back?
How long can Spurs hang onto “one of the best managers in the world”?
To Top