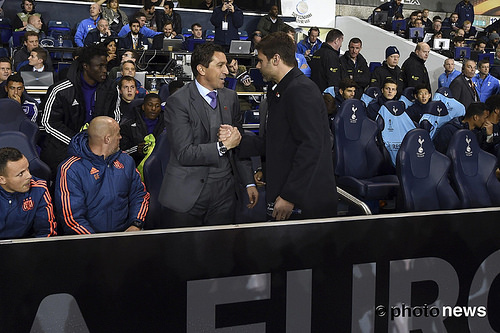 Much was made of Tottenham boss Mauricio Pochettino’s coaching genius by ‘The Two Harrys’ following England’s drab 1-0 win away to Lithuania.

Harry Kane called his club gaffer “one of the best managers in the world, if not the best”, and it’s not easy to refute that claim at present.

Despite racking up a relatively tiny net spend of less than £30m during his three-and-a-half years in North London, the 45-year-old has worked minor miracles.

A club that averaged around sixth place over the previous 10 years finished second and third in the Premier League’s past two iterations.

Going one better can’t be ruled out next May with Spurs currently third, five points behind both Manchester clubs, the red half of which has enjoyed a relatively easy start to 2017/18.

Harry Winks had previously started just 11 senior matches for his boyhood club yet was the Three Lions’ brightest star in Vilnius, and the 21-year-old echoed his Spurs namesake in calling Pochettino “fantastic” following the win.

It does beg the question – will the Lilywhites ever be big enough to hold onto the hottest property in football management?

Bayern Munich have a vacancy to fill in the summer, Paris Saint-Germain’s trigger fingers will likely get itchy if Unai Emery doesn’t win everything possible, while other giants – such as Manchester United – are known long-term admirers.

His age is on Spurs’ side, with a 60,000 stadium in the works and no obvious beef between board and gaffer regarding player recruitment.

And yet, it could all be so much more straightforward.

Danny Rose came in for a ton of flack after questioning his side’s ambition, but the likes of Davinson Sanchez, Juan Foyth and Serge Aurier are, to quote the injured Lilywhites left back, players a lot of football fans have to Google.

Next summer’s possible big movers, like Alexis Sanchez, Mesut Ozil, Phillipe Coutinho, Robert Lewandowski and Pierre-Emerick Aubameyang, won’t be heading to the new White Hart Lane, though all would be welcomed with open arms.

‘Big clubs’ Real Madrid, Barcelona, United and ‘nouveau riche’ City and PSG moving for Kane, Rose and Dele Alli is definitely on the cards though.

If Spurs keep going the way they are, Pochettino’s loyalty will entually be tested.

Then we’ll see how ambitious they really are.

Arsenal target’s reputation boosted out of sight by Everton absence
Hold my beer! Liverpool see off all comers in international break injuries stakes
To Top