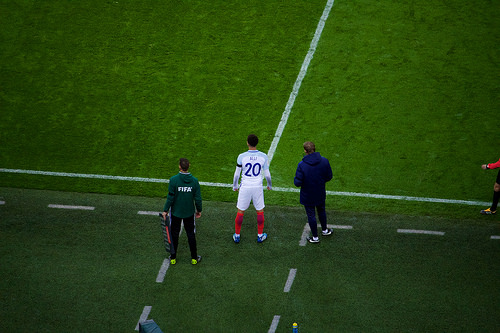 It was drab, it was ugly, it was England, but Gareth Southgate has succeeded in cajoling his charges to qualification for World Cup 2018 with a game to spare.

With countless question marks hanging over how England play and the quality of the squad after another turgid campaign, now would be a really good time to take some chances.

Southgate won’t go quite this crazy, but here’s how we’d line the Three Lions up for the dead rubber away to Lithuania.

In goal, it’s Jack Butland and could have been all along, with the next generation of keepers behind Joe Hart, including Everton youngster Jordan Pickford, bearing down on the Manchester City exile.

On loan with a struggling West Ham side, Hart could yet get swallowed up before the summer.

At centre-half, stick with Michael Keane, who came on to form a three-man backline in the 1-0 Wembley win over Slovenia, alongside John Stones.

Harry Maguire should get a half too, with so few realistic options at centre-back meaning the Leicester stopper will likely be called into action soon anyway.

Aaron Cresswell is unlikely to make the next squad should Danny Rose return to fitness, so Ryan Bertrand keeps his place, but Kieran Trippier deserves a competitive debut after starting the season in fine form for Tottenham.

Harry Winks gets a run in the centre of the park alongside club teammate Eric Dier, with the pair fresh from playing every minute of Spurs’ past two games together, which finished 7-0 combined.

With Dele Alli back at number 10, push Raheem Sterling out left, bring Jesse Lingard in for Alex-Oxlade Chamberlain, who he replaced at Wembley, and give Marcus Rashford a go up top.

As usual, the striker cupboard is bare, with only struggling Liverpool man Daniel Sturridge and 34-year-old Jermain Defoe currently in the mix beyond Rashford and Harry Kane, who could use the rest.

With little else to choose from, England need Rashford – who clearly sees himself as a number nine – ready to go at centre forward should Kane suffer an injury.