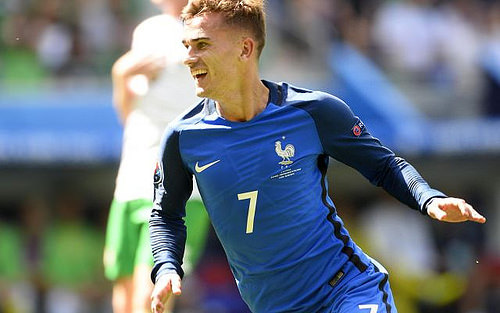 Didier Deschamps’ embarrassment of riches as boss of France means the likes of Kurt Zouma, Aymeric Laporte, Layvin Kurzawa, Tiemoue Bakayako, Nabil Fekir and Anthony Martial have been left out of the latest squad.

Each of those players would stroll into Bulgaria’s XI clicking their heels, and when injuries are taken into account, Les Bleus’ talent pool is awesome.

Paul Pogba, Laurent Koscielny, Benjamin Mendy and Ousmane Dembele should all be back by the World Cup to boost a side oozing class, particularly in the forward ranks.

Choosing two at most from Antoine Griezmann, Kylian Mbappe and Alexandre Lacazette must be a rare treat.

Should they fail, Kingsley Coman and Olivier Giroud constitute the cavalry, with Dmitri Payet providing the bullets.

Further back, N’Golo Kante has proved the complete midfielder over the past two years, complimented by Blaise Matuidi, Adrien Rabiot and Thomas Lemar.

France have tended to be excellent or awful at World Cups, winning one, reaching the final of another and crashing out at the group stage twice over the past 20 years, but they have strung together some sort of consistency in international competition under Deschamps.

The 48-year-old took his country as far as they could go before falling valiantly in the quarter-finals against eventual winners Germany at the last World Cup.

Les Bleus avenged that 1-0 loss with a 2-0 semi-final triumph two years later when hosting Euro 2016, but couldn’t manage as much when faced with Portugal in the final.

The bookies are keeping the pressure off France, giving Deschamps’ charges a top price of 11/1 – just less than struggling Argentina – to lift the trophy for the second time this summer.