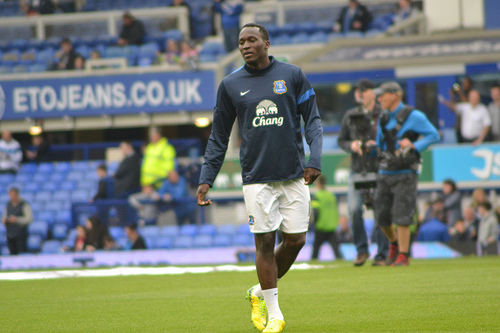 In Morgan Schneiderlin, Idrissa Gueye, Gareth Barry and Tom Davies, Everton boss Ronald Koeman picked four central midfielders in front of the defence ahead of his side’s 3-2 loss at Tottenham, a game the hosts dominated.

Koeman’s caution paid a huge compliment to Mauricio Pochettino’s Lilywhites, unbeaten at White Hart Lane this season and on an eight-match winning run in the Premier League at home.

However, the formation reduced visiting attackers Romelu Lukaku and Ross Barkley to fighting for scraps up front.

New signing Ademola Lookman, who had featured throughout Everton’s six-game unbeaten run in all competitions going into the fixture, didn’t even make it off the bench.

Attacking-midfielder Kevin Mirallas made it on with his team 2-0 down – alongside another central midfielder, James McCarthy – eventually playing in Lukaku for an 81st-minute goal, while fellow substitute Enner Valencia tapped home at 3-1 down with a minute left to play.

Koeman’s decision to pack the midfield seems baffling considering the bodies he was stacking up against, with Victor Wanyama, Toby Alderweireld, and Jan Vertonghen all excellent for the hosts, and Eric Dier not far behind.

Everton’s shape in the 4-0 win at home to Manchester City in January made far more sense, with a three-man centre-half line giving width on the wings, allowing Davies and Mirallas space inside to probe former teammate John Stones and his new defensive colleagues.

Spurs proved much more defensively solid than City, with Kyle Walker and (admirably) Ben Davies pressing the visiting full-backs high, but Lukaku’s regular presence on the left-wing during the first half – with Barkley stuck in the centre circle – underlined the Toffees’ disjointed performance.

Koeman’s team selection suggested a Lukaku winner from a Barkley flick-on was the best Everton could hope for.

Despite the hosts’ two kamikaze moments in the last ten minutes, you won’t get much away to this Spurs team – or any other side currently in the top six – playing like that.