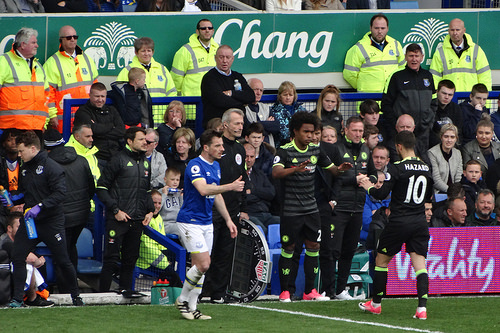 Everton boss Ronald Koeman took training as normal this morning and looks likely to be in charge for the Toffees’ EFL Cup trip to Chelsea.

The Dutch tactician has been crucified in the media after a run of just two wins in 13 matches, but now is not the time to sack him.

Nobody would claim things are going swimmingly at Goodison Park, but they have faced Manchester City, Chelsea, Tottenham, Manchester United and Arsenal during the first nine rounds of the Premier League campaign.

Each finished higher in the table than Everton last season and the quintet currently occupy the top five spots.

Koeman’s critics will point to £150m spent on players over the summer, often completely ignoring the fact that Everton’s net spend was more like £60m thanks to the sale of Romelu Lukaku.

It would have been even less had they sold Ross Barkley, whose services are now missing due to a pranged hamstring.

Losing Lukaku and Barkley, providers of 26 of Everton’s 62 Premier League goals last season, and 14 of their 43 assists, has forced a dramatic long-term rejig.

Over £30m has been spent on 20-year-olds Dominic Calvert-Lewin, Ademola Lookman, Nikola Vlasic and Henry Onyekuru since Koeman arrived on Merseyside 18 months ago.

More than twice as much (with colossal wages included) has been blown on seemingly deadweight number-10 trio Davy Klaasen, Wayne Rooney and Gylfi Sigurdsson.

It has taken a while for the problem to sink in, but the youngsters are beginning to take hold of Koeman’s thinking.

Vlasic and Calvert-Lewin have started the past four games together, with Lookman finally getting a look in off the bench in the last two.

There is a ray of light ahead, with Everton’s next six games all against sides who finished lower in the 2016/17 standings.

After what’s sure to be a big ask at Stamford Bridge, results at Leicester (A), Watford (H), Crystal Palace (A), Southampton (A), West Ham (H), and Huddersfield (H) will prove more indicative of Everton’s ‘progress’.

In this case, having ceded one top-class player to a rival and lost another to injury, overhauling the squad in the process, holding onto seventh place seems a fair goal.

Should Everton take 12 points from those six games, they’ll be exactly where they were 12 months ago by the visit to Anfield in mid-December, except without Lukaku.

If it all goes wrong and they remain mired in relegation trouble, the Toffees’ board will still have three weeks to hire a new manager before the January transfer window reopens.

Koeman has already seen off Craig Shakespeare in the Sack Race stakes despite favouritism, could Slaven Bilic be next?