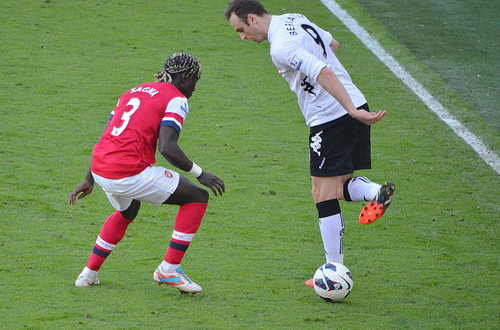 Young Leicester defender Ben Chilwell did his burgeoning reputation no harm with a fond goodbye to Spurs’ Harry Winks on England U21 duty earlier this month:

None of Ryan Bertrand, Danny Rose, Aaron Cresswell or Luke Shaw have quite managed to nail down the role under Gareth Southgate.

At the tender age of 20, time is on Chilwell’s side to stake a claim, if not for next summer’s World Cup then shortly afterwards.

However, he needs regular games at the King Power Stadium before then, and those are far from guaranteed.

Despite Christian Fuchs’ title-winning form in the previous campaign, the Austrian’s understudy managed 18 all-competition outings in 2016/17, including 13 starts, but Chilwell appears to be slowly slipping back down the pecking order.

Having covered for the injured Fuchs during his side’s stalemate away to Huddersfield last month, and keeping the 31-year-old out for Leicester’s 3-2 loss at home to Liverpool, Chilwell was back on the bench to watch teammates draw 0-0 at Bournemouth.

Chances will become even harder to come by should Shakespeare follow up confirmed interest in former Manchester City and Arsenal stalwart Bacary Sagna, a free agent.

Ostensibly a right-back, Sagna played across defence during his previous spells in England, and made 14 Premier League starts for a City side that finished third in 2016/17.

The 34-year-old would no doubt prove useful for Leicester, but his procurement could come at a cost to Chilwell.