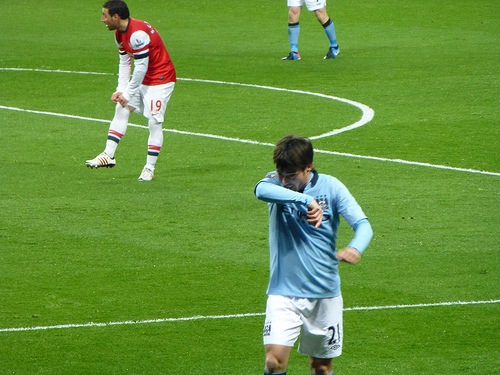 Noted purveyors of prize gubbins the Sun are running with a rumour regarding majestic midfielder David Silva’s Manchester City future.

According to ‘The Current Bun’, Liverpool and Inter Milan are thought to be monitoring the Spaniard’s contract talks at the Etihad, with a view to luring Silva away from the likely next Premier League champions in the summer.

There are several reasons to believe this rumour is nonsense.

First off, going by the 31-year-old’s form, he’s incredibly happy at City, scoring once and laying on a whopping nine goals in the Premier League and Champions League this term.

With Pep Guardiola’s side bossing the English top flight and riding high in bookies’ UCL outright betting markets, the only way is down.

Furthermore, Silva is contracted to City until the summer of 2019, meaning they have absolutely no obligation let him leave at the end of the campaign.

The one thing that may be working in would-be suitors’ favour is the Sun’s suggestion that Guardiola and co have only put a one-year contract extension on the table, presumably due to the man they call ‘Merlin’ down Eastlands way’s age.

City have multiple options in Silva’s position, including Kevin de Bruyne, Ilkay Gundogan and Bernardo Silva, each of whom are at least four-and-a-half years younger.

With the likes of Oleksandr Zinchenko, Phil Foden and Brahim Diaz also coming through, City’s supposed reluctance to commit to a player beyond his 35th birthday makes sense, no matter how good he is.

Silva doesn’t rely on pace, but he will slow down over the coming years, and that hardly fits with Guardiola’s brand of slick passing mixed with rapid counter-attacking football.

The smart money says the 116-cap Spain international will still be a more useful player than Jordan Henderson, Emre Can, Alex Oxlade-Chamberlain or even Adam Lallana in three years’ time.

Swap that quartet with De Bruyne (among the world’s best), B. Silva (only 23) and Gundogan (could be brilliant if he kicks the injuries), and the same cannot be said with any confidence.