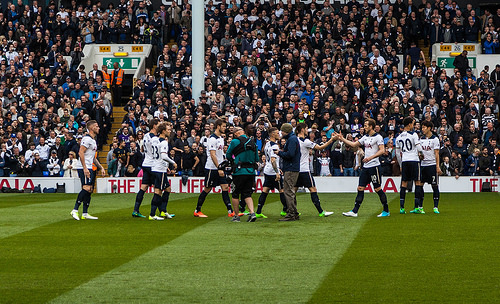 There’s more than a touch of a trend going on among World Cup winners of late, and England could yet get in on the act next summer.

Four years later, the same number of Bayern Munich men lined up from the off as Germany lifted the famous trophy, courtesy of a goal almost as late in the game from substitute Mario Gotze, also of the Bavarian giants at the time.

Some Three Lions fans need no prompting in believing their team is the best around and are always going to win the World Cup, but the exploits of Spurs’ six-man England contingent would set the most down-in-the-mouth supporter dreaming.

Coming in at a combined age of just under 24, Dele Alli, Eric Dier, Harry Kane, Danny Rose, Kieran Trippier and Harry Winks have all been named in Gareth Southgate’s latest Three Lions squad for friendlies against Germany and Brazil.

By the time the summer festivities in Russia roll round, all six could realistically expect first-team football if the Lilywhites’ form holds up.

The first three are a given in Southgate’s XI, while Rose and Winks could credibly claim to be the best in their positions in the country right now.

Right-back Trippier faces another fight with ex-teammate Kyle Walker, who would fit back in seamlessly alongside his former Spurs brethren.

Should Southgate choose to go with the sextet and ape Mauricio Pochettino’s tactics, he has many of the extra players needed to make a success of the switch.

Raheem Sterling and John Stones work to a similar high-press formula under Pep Guardiola at Manchester City, as do Adam Lallana and Jordan Henderson at Liverpool, although the efficacy of the latter has repeatedly been called into question.

Marcus Rashford has shown enough quality at international level to suggest he would adapt, with the Manchester United forward’s pace surely a huge asset.

Southgate would have to work hard with his centre-halves and goalkeeper on implementing a high defensive line, but with the rest of the team largely taking care of itself, that shouldn’t be beyond the 47-year-old and his team of coaches.

England aren’t going to win the World Cup playing the drudging way they did during qualification, and nobody expects them to, so there’d be little risk in a positive change.