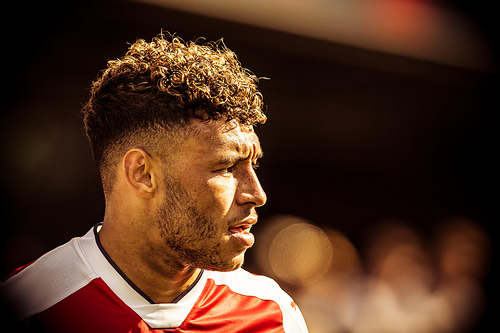 Alex Oxlade-Chamberlain has long been talked of as a future midfield mainstay.

The England international left Arsenal and turned down Chelsea this summer, choosing Liverpool because – apparently – he’ll be getting more minutes in the middle.

Fielding him at right wing-back in the 4-0 loss at Anfield at the end of August probably wasn’t the best way for Arsene Wenger to show ‘The Ox’ he was appreciated.

He might have been featuring in the Blues’ engine room right now, given Chelsea’s injury woes, but another stint out wide at Stamford Bridge clearly didn’t appeal.

It’s not really working out at Anfield though, with Oxlade-Chamberlain’s 119 minutes of Premier League and Champions League football so far coming from the bench, largely as a replacement for winger Mo Salah.

Now Klopp has confirmed that he currently sees Oxlade-Chamberlain on the flank.

Prior to the Merseysiders’ impressive 7-0 victory away to Maribor, in which Oxlade-Chamberlain bagged the sixth after coming on as sub, Klopp said:

“At this moment he is training only on the wing so it is clear, when he does start [in midfield] can never be without training as a No 8 first.

“At the moment it is clear, but I know once again it is a long-term thing, it is not fixed for the next five years.”

Klopp went on to praise his player’s performance after coming on in the dreadful 0-0 draw at home to Manchester United – yeah, cheers boss!

It sounds like ‘Chambo’, as Klopp calls him, might get a go in his preferred position if he hangs on for a year or two, or maybe longer.

Where have we heard that before…