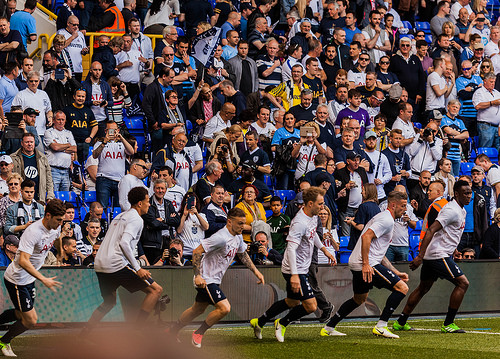 There’s an iceberg right in the way of Spurs’ massive recent progress becoming a lasting legacy.

Aboard the Tottenham Titanic, a third consecutive top-four finish looks within reach just over the sunrise, and battling back from two down in Turin to take command of their Champions League last-16 tussle with Juventus sent a message across the continent.

However, with some of Europe’s elite sides almost certain to be in the market for a new gaffer this summer, Spurs’ grip on manager Mauricio Pochettino appears to be slipping.

Paris Saint-Germain boss Unai Emery is strongly tipped to not make it past May should his side fail to overcome a 3-1 deficit against Real Madrid in their UCL second-leg at home, leaving empty a sought-after hotseat backed by Qatari billions.

Emery’s opposite number Zinedine Zidane’s job is hardly any safer, with a dud season in La Liga meaning a third Champions League trophy in fewer than three seasons as a manager may be required.

That’s an unlikely outcome given the form of Barcelona and Manchester City in particular, with Spurs, Bayern Munich, and Liverpool also looking in better shape than Zidane’s charges at present.

Pochettino is clear favourite to follow the Frenchman and seems keen on a move back to Spain.

The Argentine charmed the Madrileno press ahead of his side’s UCL group-stage fixture at the Bernabeu in October, throwing the locals chunks of red meat when reiterating that he could never manage Barcelona due to his deep ties with their Catalan rivals Espanyol.

Lilywhites fans will be soothed by their saviour’s recent declarations of loyalty, but it’s easy to snub one of the biggest clubs in the world in theory, not so much in practice.

Having seen Arsenal go backwards since suffering the financial constraints of moving to a purpose-built stadium, and knowing Spurs will not compete with the best in terms of transfer fees and wages, the lure of Los Blancos could prove far too strong.

If Pochettino leaves, the likes of Harry Kane, Dele Alli, Christian Eriksen, Toby Alderweireld, Mousa Dembele and others will be forced to assess their options, with working under the 45-year-old supposedly compensation for relatively-low wages.

Chairman Daniel Levy will have a back-up plan worked out, with Spurs an even more attractive proposition for an up-and-coming manager than it was when Pochettino took over in 2014, but his era may be drawing to an abrupt close.