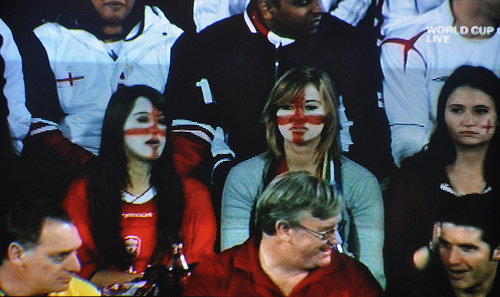 We’ve been here before.

Ahead of World Cup 2010 in South Africa, then-England boss Fabio Capello had no idea who his best goalkeeper was, and it showed.

Having mixed and matched between Ben Foster, Rob Green and David James during qualifying, the Italian veteran gave into public opinion and called up Joe Hart for pre-World Cup friendlies against Brazil, Egypt, Mexico and Japan.

The young stopper came on for Green and James respectively in the second halves of the latter two matches, kept a couple of clean sheets and bumped Foster – who had started England’s last two fixtures of 2009 – out of the picture.

Capello picked Green for the opener against USA, with the Chertsey native somehow managing to let Clint Dempsey’s 25-yard grass-cutter slip through his fingers, leading to the Three Lions drawing a match they should have won comfortably.

Green made way for James following the howler, but the damage was already done, with England finishing second in the group and soundly battered 4-1 by Germany in the first knockout round.

Do they ever learn?

Fast forward eight years, and there’s still no consensus around England’s number one.

Hart now has 75 caps and – at 30 years old – ought to be at his peak, but can’t even get a game on loan at struggling West Ham, having been very publicly binned by City chief Pep Guardiola on his arrival at the Etihad two summers’ ago.

Despite this nosedive in football watchers’ opinions, Hart still seems the logical choice to take his place between the sticks for England’s opening World Cup 2018 match against Tunisia.

Gareth Southgate kept faith with the long-time number one during the Three Lions’ blemish-free qualifying campaign, only handing the gloves to Stoke stopper Jack Butland once passage to Russia was assured.

Everton’s Jordan Pickford was given a chance in the 0-0 friendly at home to Germany in November, before Hart’s restoration four days later when holding Brazil in the same manner.

That was Pickford’s debut, while Butland has six caps in all. Everton have conceded the fourth-highest number of goals in the Premier League this season, Stoke have let in the most by quite a margin.

With four friendlies to come before the summer, Southgate needs to pick and stick with his number one quickly, but with no major tournament appearances among the young pretenders – and little international experience in general – it could, perhaps should still be Hart.

Secret lives of footballers: Part One – The former Arsenal favourite trying to save the planet
Even winning the Champions League might not save Project Spurs
To Top