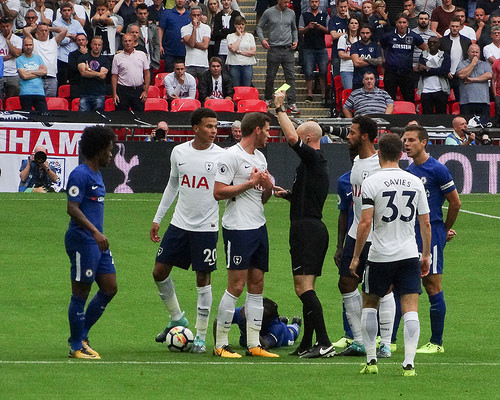 The Sun, the Star and other media outlets have given credence to a floppy-sounding rumour in Don Balon, with Real Madrid supposedly set to offer midfielder Mateo Kovacic as a sweetener in any move to land Tottenham attacking midfielder Dele Alli.

Aside from the fact that proposed swap deals rarely come to pass, the Spanish bloggers go all the way off the reservation and beyond by suggesting Los Blancos will move for Alli in January.

The Star give the game away with supreme understatement, suggesting ‘Tottenham are reluctant to lose Alli in the middle of the campaign’, apparently translated from Don Balon’s illuminating line ‘Tottenham do not want to hear about it, at least until next summer.’

Alli is contracted to the Lilywhites until 2022, so Spurs selling him in just over three months’ time would make no sense, whatever the price.

Next summer will be a different matter, with Alli’s recent decision to switch agents – likely the catalyst for the current swirl of rumours – a bad sign for Mauricio Pochettino and co.

Talk of a £100m-plus transfer fee catapults Alli far above his current pay rate of £50,000 per week, and he’s not the only Lilywhites star being sold somewhat short.

Centre-half Toby Alderweireld, widely regarded as one of Europe’s best defenders, has been making similar noises through his agent.

Who can blame the brilliant Belgian when untested Manchester United newcomer Victor Lindelof banks more than double Alderweireld’s £2.5m annual salary, and is yet to play a Premier League minute?

Charging for the exit

Other problems for Pochettino are in the pipeline – United’s reported £50m interest in Eric Dier surely makes the granite-hewn England all-rounder feel more like a £50m player, and £50m players tend to command £100,000-plus per week.

That’s how much top earners Hugo Lloris and Harry Kane rake in, but the latter’s goalscoring rivals Sergio Aguero at City, Romelu Lukaku at United and even Arsenal summer signing Alexandre Lacazette are all paid at least twice as much, astonishing as that may seem.

Pochettino deserves credit for gaining a measure of success with this model, but Spurs won’t be able to hold onto some of Europe’s best players – which Alli, Alderweireld and Kane quite clearly are – if they don’t pay the going rate.